Benefits and Uses of Epithalon Have you heard of epithalon, aka epitalon or epithalone? While it’s discovery dates back multiple decades, its benefits for a wide variety of ailments are drawing huge praise from today’s medical community.

About the Revolutionary Anti-Aging Peptide Linked to a Longer, Fuller Life

In this article, we’ll explore the history, benefits, and uses of epithalon and how you may be able to enjoy a longer, fuller life by taking advantage of its properties. What is Epithalon, and How Was it Discovered?

Epithalon is a synthetic version of an extract called epithalamin. It was discovered in the 1980s by Professor Vladimir Khavinson, a Russian scientist who currently serves as Director of the Saint Petersburg Institute of Bioregulation and Gerontology.

Khavainson had been tasked with finding a way to help military troops heal from battlefield damage. He harvested epithalamin from pineal glands of calves and discovered that certain chains of amino acids known as peptides could regenerate tissue and restore function to various organs and tissues that had fallen into disrepair.

However, since epithalamin was difficult to harvest from animals in large amounts, he found a way to create a synthetic version (epithalon), which is widely prescribed today for its anti-aging properties.

How does Epithalon Work?

Epitalon helps to increase the body’s production of telomerase, an enzyme responsible for replicating DNA so that the body can repair damaged cells and create new ones.

Cell division is an important part of a healthy body. In our younger years, we produced high amounts of telomerase, but this amount declines as we age. This means cells don’t divide as fruitfully or repair themselves as fully as they did in our teens and twenties.

How does this lack of cell division affect our bodies? We generally refer to the effects as “aging.” Wrinkles in the skin appear, our physical strength begins to fade, metabolism isn’t what it used to be, and it gets harder to pull details from our memory. Our immune system weakens, and we become more vulnerable to deadly diseases and conditions.

And now the good news: by using epithalon, you can bring those telomerase levels back and fight back against the effects of aging.

By activating the telomerase genes, epitalon improves the cell’s ability to go through multiple divisions. Cell division is an important component of many functions, but cells have a limited number of divisions in them as telomerase production slows in older age. Epithalon gives a substantial boost to this process and gives the cells renewed life to divide and prosper.

By extending the lifespan of the cell, it gives the entire body an extension of life. What are the Benefits of Epithalon?

Since epithalon stimulates the pineal gland, many of the benefits are related to this gland’s function. The pineal gland produces melatonin, which is responsible for regulating the body’s biological clock. This is why many users of epithalon report a much-improved quality of sleep. It is also related to reproductive functions, which can be revitalized through the use of epithalon therapy.

There are many more potential benefits to be gained from epithalon, including:

Several studies regarding the effects of epithalon on animals show extremely promising results in key areas.

Some of these include:

Speak to a Doctor About Epithalon Treatment Today

It may have begun as a treatment for Russian soldiers, but now it’s a viable and popular medical treatment for a variety of age-related conditions and ailments.

Since epithalon treatment requires a prescription, you’ll need to speak to a doctor to find out if you’re a good candidate. A doctor can clearly explain the many benefits and uses of epithalon and what you can expect if you begin treatment. Contact a medical professional today to learn more about epithalon. Dr. Seeds is a board-certified surgeon practicing medicine for over 25 years, Founder and Chairman of the International Peptide Society, Faculty Developer and Lecturer of the A4M Peptide Certification Program, and leading Peptide therapy researcher. He is Chief of Surgery and Orthopedic Residency Site Director for University Hospital, Conneaut OH. He has been honored at the NFL Hall of Fame for his medical expertise in helping professional athletes recover from their severe injuries, and Professional Medical Consultant for the NHL, MBL, NBA, and NBC’s Dancing With The Stars. Today, he’s dedicated to bringing his mission to everyone: athletes, mom, entrepreneurs and everything in between. His mission is simple: Help people feel better, operate at the highest functionality in their physical bodies, their brains, their bones, and everything in between without toxic pharmaceuticals or temporary fixes that are inefficient to healthspan.

This site uses Akismet to reduce spam. Learn how your comment data is processed. Powered By MemberPress WooCommerce Plus Integration 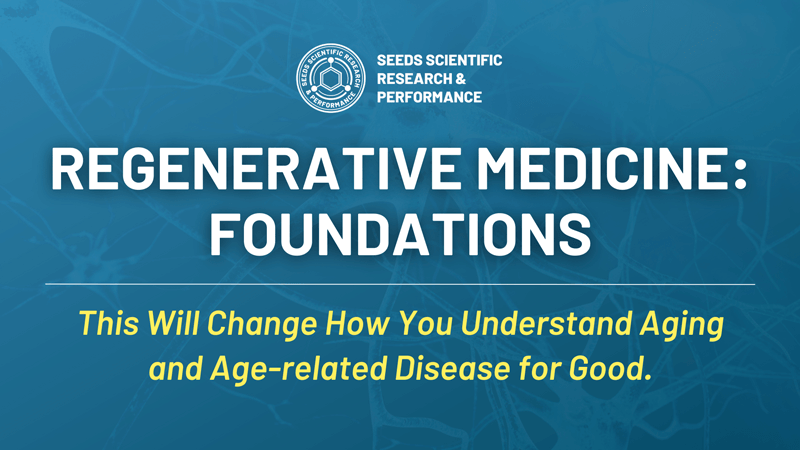 Get My Exclusive Research on Cell Efficiency, Peptides, and Cellular Senescence.

Your email is private and will never be shared with a 3rd party.

This website and blog is for general health information only. This website is not to be used as a substitute for medical advice, diagnosis or treatment of any health condition or problem. Visitors and users of this website should not rely on information provided on this website for their own health problems. Any questions regarding your own health should be addressed to your own physician or other healthcare provider.